The success story of a Gujarati Retailer: Made a sanitizing machine better and affordable than China. 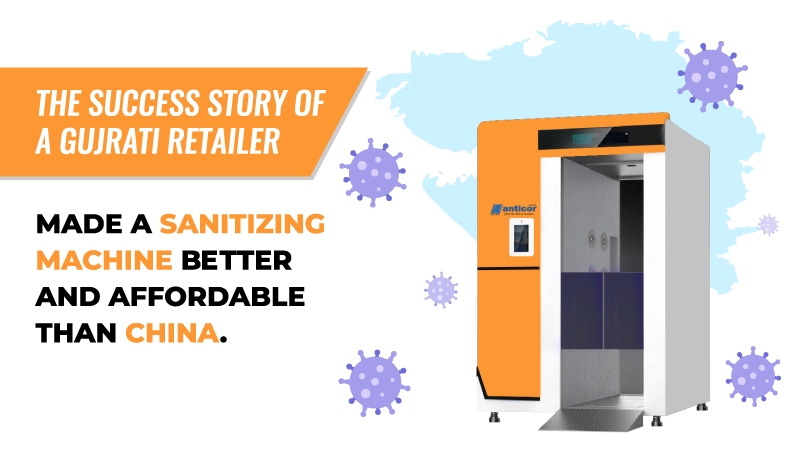 Inspired by the country's Prime Minister Narendra Modi’s words and motivation, Ahmedabad-based businessman Vallabh Patel has built a vast eight by eight feet sanitizer machine. The machines work in five different steps and sanitize everything from head to toe, clothes, and shoes. Trader Vallabh Patel says it is the first time he has built such a sanitizer booth. Adding more to the surprise, it is the first one-of-its-kind sanitization booth in India after China. He promises to manufacture more such machines and give it to the government.

Mr. Vallabh Patel, a trader from Ahmedabad, claims that China has made this product at the cost of Rs 15 lakhs. But the value of the product he made is only Rs 6 lakh, and he plans to sell this machine at the claimed price only.

The quality and uniqueness of this machine are much better than the Chinese machine. Mr. Patel also added that when the Prime Minister of the country Narendra Modi was once the CM of Gujarat, he always encouraged him and new entrepreneurs to do something innovative and revolutionary. And today,  when the country needs such an advanced Sanitizer machine, Mr. Patel and his team feel proud of building one such sanitizing machine.

There are five processes taking place in this machine. Initially, the body temperature is measured by the device. Once the temperature of the person falls in the acceptable limits, the person is allowed to enter the booth. The person entering the booth will be sanitized from head to toe, including the clothes and shoes. Ultimately, the steam obtained from the machine will disinfect the body, and in the final process, the disinfectant mist gets activated and sanitize the hands.

Through these five processes, the person is completely sanitized and free from the coronavirus. Mr. Vallabhbhai has made such machines in various sizes, which include eight by eight feet, seven by eight feet, and also in smaller sizes. He says that at present, the demand for this machine outside India is also high. But first, he will fulfill the needs of his own country and then supply it abroad. He further adds that our own country is in urgent need of such machines in the current difficult times of the pandemic.